(Spoiler alert.) Prior to watching The Witch (2015), the word “folktale” in its subtitle made me skeptical. I was afraid that the director, Robert Eggers, had snuck the word in as a marketing gimmick or that maybe I’d realize midway through the word had been genuinely misused. By the end, I found neither of these to be true. 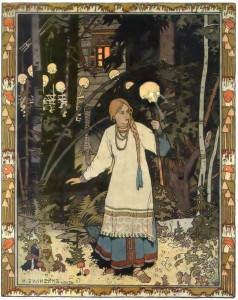 The word “folktale” is a type of folklore and a form of storytelling that stems in cultural origin and assimilation, usually begun and passed down by word of mouth alone. Knowing the original creators of a story can be next to impossible, as with every retelling of a tale, a pinch of detail can be added or removed as deemed necessary by the storyteller and a simple embellishment can change the story entirely. In many parts of the world today, the tales created centuries ago continue to be passed down to the youngest generation so much so that they become entangled into the daily lives of its intended audience. Some tales were claimed to be true while others were clearly fictional, but they could serve a purpose— to teach lessons and morals to live by. 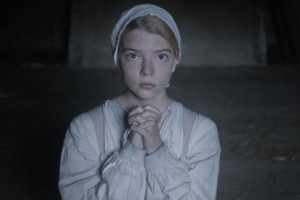 Immense detail was paid in The Witch, a story told through the eyes of a family cast out of their plantation during early America. From the immersive Puritan language (which director Eggers used to write the screenplay) to the film’s style (which reminded me of Kubrick’s wide-angled shots and music score in The Shining) you can’t help but live alongside these people, even if unwillingly, squirming and holding your breath as the entire experience reeks of something wrong, something evil. It is rare to find a gem of a horror film such as this where the atmosphere of horror is so precise that it leaves not a sliver for anything more.

Within the first eight minutes we are introduced to a witch in flesh and blood. I applaud Egger’s use of lighting, in which he relies on flickering flames and shrouded darkness to envelop the characters and his audience, allowing himself to show only what is necessary and in turn allowing our imaginations to fill in the blanks. After all, when we allow ourselves to become frightened rather than by what is only force fed to us on a screen, we are truly engaged in a genuine horror film.

Because folktales tend to be over the top, they rely

on symbolism to portray the truth—the earthly reason for their existence. From the use of animals (the black goat, the hare, the crow) to other layered symbolism, The Witch had all the markings of a well done folktale. In the film, each of the characters in the family symbolized a raveling thread of sin which would ultimately lead to their demise. The father, and the most devout of the family, suffered from pride. The mother claimed to, “have become as Job’s wife,” in her loss of faith. Their young son had lustful eyes and the twins a shared wicked spirit, claiming to have whispered conversations with

the black goat. Only one child, Thomasin, is truly pure. In the very opening scene we see her dressed in more white than the others in her family. She is the only one who looks at her father in disbelief as he accuses the council of being false Christians. The symbolism is not only visual, but felt via dialogue.  The morning after the baby is missing, Thomasin’s father states, “The devil holds fast your eyelids.” Due to the nature of the puritan English language, much of the lines come across as poetry.

The symbolism within this film folds onto itself so that we are left with a ‘moral-of-the-story’ to digest, long after leaving the theater.

What I truly appreciated in this film was that film’s director took folklore seriously. In the West Indies most recently a toad was found on the steps of a courthouse. Many people gathered about, but they all kept their distance. Soon, a news crew showed up and the reporter asked some of the onlookers what was going on. They all claimed that the toad had it’s mouth sewed shut, and by their very

demeanor they all knew it was something of an evil nature. Someone had done this to stop a witness from speaking. When the toad’s mouth was finally opened, a piece of paper emerged containing details of a witness’s name. I couldn’t help but think of this when watching The Witch during the scene where Thomasin’s brother, Samuel, becomes overtaken with evil after his encounter with the witch in the woods. His mouth becomes shut tight when his mother asks who has done this to him. Only after his father pries his mouth open does a bitten red apple fall from his lips. Even today, folklore mixed with other beliefs can provide a recipe for action in the twenty-first century.

In much of folklore, evil will attempt to shush those who know and say things they mustn’t.

See also  10 of the Creepiest Folklores from Around the World

The Witch will go down as one of my most favorite horror films of all time. It earned higher critical acclaim than it did with general audiences. When I wonder why this might be, I think of the formulated horror genre we’ve come to know. The Witch rises above such a formula, it shows the confidence of good storytelling with respect to its origin. Instead of it being a mystery in which individuals cannot understand the world in which they live, this film’s characters accept that in their 1600s society anyone can be proclaimed a witch and die for it, and that the devil is as present as a righteous God.

And because of Egger’s capacity for creating not only a movie, but an experience, The Witch proves that folktales will continue to stand the test of time.