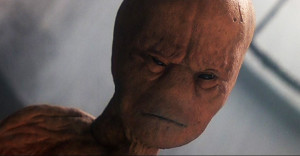 If you haven’t seen the 1993 Docudrama Fire in the Sky, arguably a true story, I suggest you put aside your plans for tonight, turn off the lights, and watch this with your hands partially covering your eyes. This movie has a scene, quite famous, which can make even the bravest of horror fans squirm in their seats. What makes this particular scene stand out? Roger Ebert explained, “They convincingly depict a reality I haven’t seen in the movies before, and for once I did believe that I was seeing something truly alien, and not just a set decorator’s daydreams.” And they did it with old-fashioned special effects. Take a look, trust me, the visuals are stunning.

1993 was a long time ago, considering the advances in film and movie-making capabilities made since then. Computer-generated Imagery, or CGI, has come to play a major role in the film industry, leaving no genre untouched. When the masters of CGI are able to mesh this technology seamlessly in order to trick audiences into believing what they’re seeing, CGI earns a well deserved nod of approval.

The first widespread use of CGI began in the early 1980s with films like The Abyss by James Cameron and his creature made of water, the same technique was used again by Cameron in Terminator 2 for the T1000. The breakthrough, though, was Jurassic Park (1993) and solidified in 1995 with the first full-length CGI film, Toy Story.

See also  The Horror in "It Can Happen to You”

When used correctly, CGI is an undeniable powerhouse of a tool. But, when used in an overzealous fashion, or without the seamless-ness that human eyes can so easily detect, audiences become disengaged from the viewing experience. For instance, audiences pay close attention to the actors on the screen, their body movements and facial expressions. Actors perform best when they are able to react. When an actor cannot portray the realism that audiences crave, the illusion is shattered. A good example of this was the excessive overuse of CGI in the Star Wars prequels in which almost every frame was shot with some level of green screen. Take the movie, The Thing (1982) and compare it to the 2011 remake. The original holds a 8.2/10 audience approval on IMDB while the latter only a 6.2/10. The original did not use CGI, it utilized puppets and props to show us the slime and details of the mysterious shape-shifting creature. Some argue that the remake simply relied too heavily on its use of CGI.

CGI takes away all limitations from the director, so it’s likely and even tempting to go overboard with the technology. The problem with overuse or mismanagement of CGI is that no matter how good of a job they do with it, the human brain can easily tell when something is fake, it breaks immersion.

In the horror genre, where storytellers rely heavily on the suspension of disbelief from their audience, CGI can be especially devastating. The 2013 film Mama earned a 6.2/10 on IMDB. While the plot was of solid substance, the overuse of CGI to 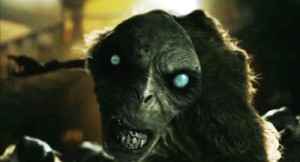 provide scares cost the director points in “believability”. Another example is a 2010 remake of the original 1973 made-for-television Don’t Be Afraid of the Dark which scored a 5.6 on IMDB. The creatures under the bed in Don’t Be Afraid of the Dark were almost laughable, moving unnaturally  as if more suitable for cartoon animation rather than a serious horror film. Motion and movements with CGI can be detrimental if not used appropriately, it is up to directors to decide what works best depending on the film.

On one hand, CGI is great for quick motion and smooth movements, but the result often doesn’t look real. On the other hand, puppets don’t move fluidly, but viewers are more likely to believe what they’re seeing.

In The Thing (1982), there is a scene where the team’s dogs are trapped in their cage with the shape-shifting creature. Without the use of CGI, we see the creature rip itself from

the form of a dog into its original mass– a grotesque, squirming alien. Not only do we get to experience the amazing details of the creature as it unfolds before our eyes — we are watching the actors react to the scene naturally.

CGI is here to stay, and everyday the film industry sees and influences improvements in its development. With technology, however, it is pertinent to remain sincere to audiences. No film is without its share of make-believe, but if there is so much reliance on CGI that it actually harms a film, it may be time to take a huge step, perhaps twenty-three years, back to the beginning.

This article was featured in Six Strings Magazine, season 1: episode 9: